Ilavazhaki is living her dream. Call it her father's dream. She's a world champion. Daughter of A. Irudayara and Selvi, Ilavazhaki is the eldest of three sisters. Her younger sisters are Ilakkia and Chevanthi. 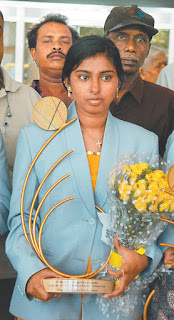 Back in town after clinching the women's world carrom title in France. Ilavazhaki is wooed by the media. The spotlight is on her for the moment. As she is fondly called, takes it in her stride with a smile. Success sits lightly on this young champ. It is her childlike innocence that immediately endears you to her. Confident, yet not bordering on arrogance, that is Ilavazhaki, quite unlike several of the present crop of GenX.
Ilavazhaki has been winning global plaudits since 2003, but has remained virtually unknown in our country where the cricket fraternity and the tennis sensation rule the hearts of people.
Todat, she is numero uno after winning the title in the fifth World Carrom Championship at the Palais Des Festivals, Cannes, in Feb 2008. She defeated P.Nirmala of Hyderabad with a score of 25-11,25-11 in the finals. Twenty nations participated in the tournament.
"It felt really great. I was the youngest among the players there, They were all very encouraging," she says.
Post-victory, she was showered with gifts from other players. One player even offered her 1000 Euros in exchange for her striker, her most prized possession. Says Ilavazhaki," I have been using this striker for the past eight years. It is my lucky talisman. Even my father does not play with it."
Earlier, she had won the national title in Chennai, beating former World Carrom Champion Rashmi Kumari, also from India. Of all the victories, this one is closest to her heart. "I had won several matches before this, but this was special, since it was played in Chennai, my hometown," she explains.
Her father Irudayaraj was a district level champion in carrom, but with no encouragement from his family, he could not pursue the game.
When his daughter was born, Irudayaraj began dreaming once again. From the time she was two, he would carry her with him to the tournaments he played in with friends at local clubs.
Selvi (Ilavazhaki mother) says, "Even when she was six-months old, my husband would put her at the board." Probably the feel of the board and the sound of the striker and coins would have sown a passion of the game in the girl from an early age.

Irudayaraj began coaching his daughter when she was around five. "In the mornings we would practice from 4 to 8. I then used to accompany him to the local clubs where he played matches."
On one such occasion - she must have been around seven-- Irudayaraj asked his daughter " Would you like to play a match ?? "
Ila was surprised. "How could I play against my father or his friends, they were all seniors?" she had wondered.
Irudayaraj persisted. she agreed to play a match against here father. Recalling that day, she says with a smile, "I won the match, but father deliberately lost the game. I was so thrilled. It gave me confidence." 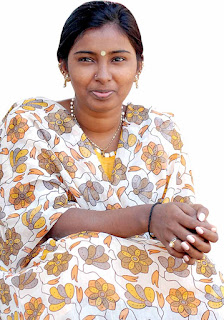 Referring to the incident, the proud father says, "She is my child, not my competitor. It was her learning years and that encouragement helped her to move ahead."
From winning the junior nationals in 2000 at Dehra Dun, to the World Championship in france, it has been a long journey.

From 2003 to 2005, she won the singles regularly in youth national tournaments. She won the 12th Federation Cup in 2004 and was runner-up the next year the same tournament. In 2003 when the US open tournament was scheduled in New Jersey, she realised that in order to participate in this tourney, she needed funds to the tune of Rs. 75,000. With ouly 15days left for the tournament, Champion gave up hope of participating in it. But Selvi said, "You should not give up so easily. Let us see if someone can help us." And the Good Samaritan was Dr.Christodas Gandhi, IAS who helped her. Since then, he has been helping her participate in tournaments abroad.

Looking back on those difficult moments, she says, "I owe it all to Christodas Sir. I had no passport, but Sir got it ready for me within two days. I had to go to Delhi for training. It was the first time I was travelling alone." She was 19 then gandhi Sir got in touch with IPS Thilakavathy who deployed a couple of police persons in mufti to escort me to Delhi."
At the US Open in 2003, she came third and won the 'Best Woman Player' award. At the 10th SAARC International event in 2006, she was runner-up, but the following year, when the 11th SAARC tournament was held in Nagpur, she emerged winner.
At the 1st and 2nd Asian cupin 2005 and 2006, she won. There has been no looking back since then. At the South Zone tourney held in Pondicherry, in Feb 2008 victory was hers.

She trains regularly in the evenings, sometimes alone or with her sister and father. Talking of her daughter, Selvi says, "Once Ila sits at board, she is totally focused. She will not bother about what is happening around. All that matters to her is the game.

Irudayaraj says, "She is mature beyond her age. Her success is the result of her hard work, her determination and belief in herself." Modest about her success, the young champ says, "It is God's gift and my parents encouragement. When I lose a match, they tell me it is OK. Only work harder for the next match so that you may win a bigger tournament."

Email ThisBlogThis!Share to TwitterShare to FacebookShare to Pinterest
Labels: BEATING THE ODDS 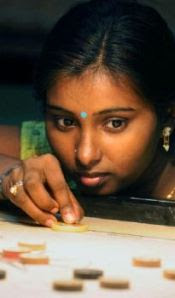 The world carrom champion is a 24-year-old from Chennai who has been winning global plaudits, but is virtually unknown. Despite her many achievements, Ilavazhagi, the daughter of an auto-rickshaw driver, has not been able to capture media attention. In an age when old sports have been edged to the backburner by the hype over super-glamorous money spinners like tennis and cricket, whose stars sell for millions, this woman from Chennai is soldiering to keep alive the legacy of a game that binds thousands of Indians across cities and villages. Ilavazhagi is the world number one in carrom but while she grows in international games, her homecoming parties get smaller. Only small local outfits receive her at airports, host her at felicitations and lobby for government jobs for the whizkid to survive in the game. Ilavazhagi bagged her maiden women’s title in the fifth World carrom Championship at Palais Des Festivals, Cannes, Feb 17, defeating P. Nirmala, also from India, 25-11, 25-11 in the finals. Ilavazhagi, who won the national title recently in Chennai, beat former World Champion Rashmi Kumari in straight games in the semi-finals. Players from Sri Lanka, India, Pakistan, the Maldives, Bhutan, Bangladesh, the US, Britain, South Korea, Japan, Italy, Switzerland and France took part in the championship. Ilavazhagi also won the national women’s singles title Feb 7. Ilavazhagi hails from Vyasarpadi on the outskirts of north Chennai. Her father Irudhayraj and mother Selvi, a homemaker, are proud that their eldest daughter has made it to the international stage, but they are full of doubts about her future. “What after this?” they wonder. Who will sponsor Ilavazhagi’s participation in international tournaments in the future? What kind of career will she eventually be able to chalk out in the coming years? These are questions that haunt them. Ilavazhagi has been struggling to make both ends meet and was searching for a job the whole of last year even as she continued to play carrom. Returning from France last week, Ilavazhagi was greeted by her father and little sister at the Chennai international airport and a few office-bearers of the Chennai district carrom association. She got a bouquet, but she thought that the welcome home was “just great!” A few days later, another small meeting sought a government job for her. “I feel the reception to my success was fantastic. Much better than when I won the Asia Cup, SAARC Cup and even the World Cup”, she said. Ilavazhagi, however, has an unlikely supporter. K. Vijayal, 65, a retired Reserve Bank of India officer, Sunday gave Ilavazhagi a purse of Rs.5,000, which Vijayal said was “a tiny drop in the ocean of support Ilavazhagi needs”. She is not only a fan but also a former carrom champion who won the national mixed doubles in 1973, partnering S. Dilli. Content navigation
Posted by computer guru at 21:46 3 comments: